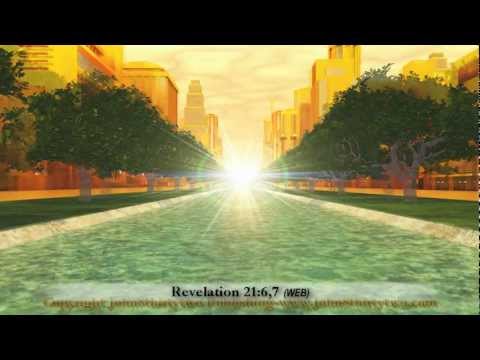 I John, who also am your brother, and companion in tribulation,and in the kingdom and patience of Jesus Christ,was in the isle that is called Patmos, for the word of God,and for the testimony of Jesus Christ. I was in the Spirit on the Lord’s day….One of the seven angels who had the seven bowls,who were laden with the seven last plagues came,and he spoke with me, saying, “Come here. I will show you the wife, the Lamb’s bride.”And he carried me away in the Spirit to a great and high mountain, and showed me that great city, the Holy Jerusalem,descending out of heaven from God, prepared as bride adorned for her husband.Having the glory of God:and her light was like to a stone most precious, even like a jasper stone,clear as crystal.The city was pure gold, like pure glass.The city had a wall great and high,and the building of the wall of it was of jasper.And the wall of the city had twelve foundations, and in them the names of the twelve apostles of the Lamb. And the foundations of the wall of the city were garnished with all manner of precious stones.The first foundation was jasper,the second, sapphire,the third;a chalcedony;the eighth,beryl;the ninth,a topaz;the tenth a chrysoprasus;the eleventh,a jacinth;the twelfth,an amethyst.The great high wall had twelve gates. The twelve gates were twelve pearls. Each one of the gates was made of one pearl.And at the gates twelve angels;and names written on them,which are the names of the twelve tribes of the children of Israel.On the east three gates;on the north three gates;on the south three gates;and on the west three gates.He who spoke with me had for a measure a golden reed to measure the city,its gates,and its walls.The city lies foursquare, and its length is as great as its breadth.He measured the city with the reed,twelve thousand stadia.Its length,breadth,and height are equal.He measured its wall,one hundred forty-four cubits,by the measure of a man,that is,of an angel.He showed me a river of water of life,clear as crystal, proceeding out of the throne of God and of the Lamb,in the midst of its street.And the street of the city was pure gold, as it were transparent glass.On this side of the river and on that was the tree of life,bearing twelve kinds of fruits, yielding its fruit every month.

Leave a Reply to how to make a Cancel reply