Just imagine how much pain and confusion is being sown at such a young age. It is just unbelievably heartbreaking. 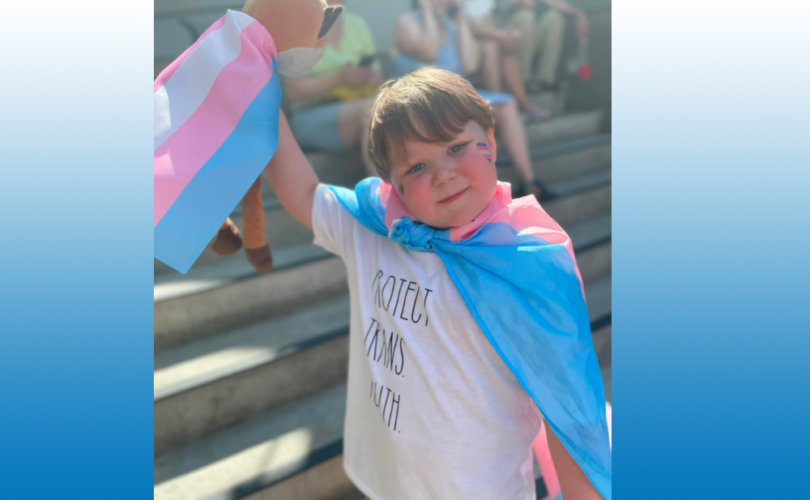 (LifeSiteNews) — At Vancouver’s Pride Parade on July 31, a preschooler walking with her grandmother fired a blue gender reveal cannon to announce that she would be transitioning to male.

“Charlie Danger” Lloyd is a little girl from British Columbia, Canada. She is only four years old. Four-year-olds are not capable of understanding many things. If I subscribed to transgender ideology’s bifurcation of sex and gender — and I do not — I would still be entirely confident that a preschooler could not understand it. Preschoolers also do not have the self-awareness to declare that, based on their years of understanding and experience, they have been born into the wrong body.

But it is 2022, and Lloyd’s mother confirmed her desire to be a boy. Lloyd — the preschooler — uses “he/him” pronouns (have you ever met a preschooler who knew what a pronoun was?) and was apparently thrilled to make the transition announcement at Pride (this was obviously Lloyd’s idea). According to Lloyd’s mother:

Once they closed the road, Charlie strutted out with Grammy and they faced the sidelines and after a short struggle, the cannon exploded with blue smoke and biodegradable confetti. Charlie jumped with joy as the crowd cheered him on. He couldn’t believe the love and support he was shown from the bystanders.

Lloyd’s mother says the preschooler has wanted to be a boy since the age of two. She also says the gender cannon reveal at Vancouver Pride Parade was all Lloyd’s idea, and that the reason she and others knew Lloyd was a boy is that as a toddler she often said she wanted to look “just like daddy” and insisted she was a boy. “He wasn’t your typical little girl. He would play with other boys and the parents would say he was more of a boy than their own children,” she said.

At preschool, staff and other preschoolers congratulated Lloyd when she shifted to he/him pronouns—the transition, says Lloyd’s mother, apparently began several months ago. The tipping point wasn’t just the playing with boys and the tomboy behavior, but the fact that she wanted her hair cut short.

He refused to shop in the girl’s section, but was too nervous to shop in the boys [sic]. After lots of expressing his feelings and emotions with me, he decided he wanted a new wardrobe so we set out to find our new style. We made an appointment with Lia at Big Bros Barbershop, a trans-owned and operated salon in East Vancouver. After leaving the salon, Charlie was a completely new child.

In other words: the little girl was now a boy.

Let’s summarize this story based on what this child’s relatives have said. A little girl said she wanted to be just like her daddy and as a result, said she was a boy. She also played with many little boys and showed tomboy behavior (presumably because she wanted to play with stereotypically masculine toys). She wanted shorter hair and didn’t want to wear girly clothes.

As a result of this, the little girl’s mother talked at length with her, presumably told her she had the option to say she was a boy, and began to “socially transition” her—not by letting her play with the toys and kids she wanted and letting her have short hair, but by affirming that she is a boy, telling all of her peers to call her a “he,” announcing this fact on social media and to various media outlets, and then making a show of it at the Vancouver Pride Parade.

Just imagine how many little children are being led down this path by eager adults who believe that a two-year-old girl saying she wants to be like her daddy means that she’s a boy. Just imagine how much pain and confusion is being sown at such a young age. It is just unbelievably heartbreaking.