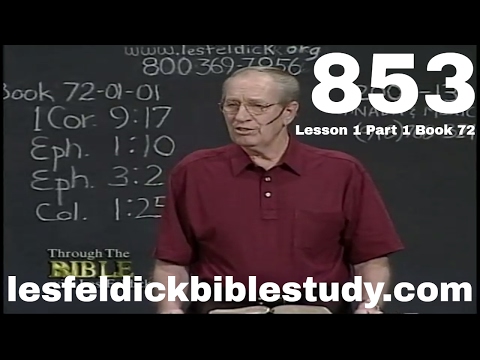 Through the Bible with Les Feldick
LESSON 1 * PART 1 * BOOK 72
THE BIG PICTURE OF WHY WE
BELIEVE IN THE PRE-TRIBULATION RAPTURE
I Cor. 9:17; Eph. 1:10; Eph. 3:2; Col. 1:25
All right, glad to see all of you here in the studio. For those of you out in television again, we would like to invite you to sit down with your Bible and your pen and notepad and just study with us. I’m not a preacher. I’m not going to be lecturing you. We’re going to be teaching just like any other teacher would out of a textbook, which means that we’re going to use as many Scriptures as possible to not prove the point of Les Feldick, but to prove the point of God’s Word.
Now, I just announced to our studio audience that we just got back from three weeks down in Florida and had a great time. The very first church where we started down at Fort Myers, the pastor had asked before I even left Oklahoma, “I never tell a visiting speaker what to speak on, but if you feel so led, I would really appreciate it if you would address why we stand on a pre-tribulation Rapture. Because I understand that we’re under attack for that like never before.” Of course, I’m hearing it from every quarter that people are almost getting aggressively hateful about our stand on a pre-trib. Rapture.
So, I agreed wholeheartedly. We were there for the Sunday morning Sunday school hour, the morning service hour, the evening service; and then Monday, Tuesday, and Wednesday night, for an hour to an hour and a half each night. And as people were leaving, that’s what gave me the idea, they would say,”Les, why don’t you make a series of programs on this?” And I said, “Well, we’ll consider it.” The more I thought about it and prayed about it, it just seems as though this was the way we’re going to go. I don’t know how many programs it’s going to take. I don’t know where we’ll end any one particular program. We’re just going to be flying free on this, and when we run out of time, we’ll stop and just start up the next time where we left off.
We’re going to start on the premise that you cannot understand the concept of the Rapture and the Tribulation and the Second Coming and the Kingdom without being a dispensationalist. Now, it’s a hated word in a lot of quarters. It’s as if it isn’t even Scriptural. But, I have put four verses on the board. We’ll look at them briefly. They all make reference to that very term — a dispensation.
We’ll look at them as we’ve got them up here. The first one is I Corinthians chapter 9 verse 17. While you’re looking that up, I’ll just share an experience with one of my listeners. Several years ago he approached his pastor and he said, “Pastor, why don’t you ever preach a sermon on the Rapture?” “Oh,” he said, “I wouldn’t dare do that, then I’d be a dispensationalist.” Well, what’s so bad with that? But they’re almost afraid of the term as if it’s an unbiblical concept, but I’m going to show you that it is a Scriptural term. I Corinthians chapter 9 verse 17, where Paul writes:
I Corinthians 9:17
“For if I do this thing willingly, I have a reward: but if against my will, a dispensation of the gospel is committed unto me.” Dispensation—we’re going to explain that in more detail after we’ve looked at these four verses.
All right, the next one is Ephesians 1:10. Just keep on going to the right through Galatians to Ephesians chapter 1 verse 10, and again Paul, by Holy Spirit inspiration. Remember, Paul doesn’t write one word that isn’t inspired by the Holy Spirit, and he uses the term. Isn’t it amazing that much of Christendom detests it. A biblical term, a Scriptural term, but they detest it. And if we get a letter at all that’s less than kind, that’s what it’s over. “How can you teach this false theory of a Rapture?” Well, this is why – because it’s biblical!
Ephesians 1:10
“That in the dispensation of the fullness of times, he might gather together in one all things in Christ, both which are in heaven and which are on earth; even in him:” That’s a different dispensation, but never the less the same term.
Now, the next one, I think, is chapter 3 verse 2, and this is actually the verse that we used in every service under those circumstances. I was actually asking my audience to memorize this verse. And it’s easy to memorize. And it’s a good foundation for our approach to Scripture.
Ephesians 3:2
“If ye have heard of the dispensation of the grace of God (That’s the one in which we are.) which is given to me (But it doesn’t stay there, where does it go?) to you:” And who are the you that Paul is writing to? Gentiles.
So, the dispensation of grace is a set of instructions that God has given to us as Gentiles in particular. I’m going to go into that in a little bit.