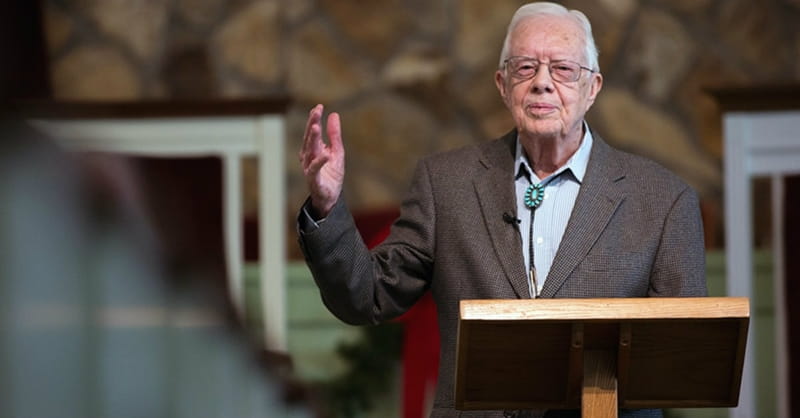 We wake at 5 a.m. because we are told everyone in our hotel has come for the same reason —  to see 92-year-old Jimmy Carter, the 39th president of the United States, conduct Bible study at Maranatha Baptist Church.

An hour later, still 45 minutes before sunrise, my wife and I, along with her brother and his wife, are driving 10 miles west from Americus to Plains.

The man handing out numbers at Maranatha Baptist says that, at 6:25 a.m., we are car No. 72, and he reckons that 160 people will stand in line ahead of us.

At the front door, I empty my pockets and a Secret Service agent waves a wand across my front and backside.

Once inside, I give thanks for air conditioning and the absence of gnats.

Greeting visitors in the foyer is Maranatha’s 23-year-old minister, Brandon Patterson, who was hired just two months earlier and won’t graduate from the McAfee School of Theology at Mercer University in Atlanta until December.

The occupants of car No. 1 are seated in the front row of the sanctuary.

We are ushered to awkwardly visible seats in the second row of the two-row choir loft behind the pulpit, our backs up against a stone wall on which a cross is displayed.

The sanctuary fills quickly, as does an overflow room with video screens.

At about 8:30 a.m., a church volunteer announces that the “the other J.C.” will arrive in about an hour.

Waiting are many of Maranatha’s 130 members, along with a few hundred visitors from across the U.S. and the three young women seated in front of us who are from China.

Today, he says, we’ll be reviewing “one of the most difficult sections of the Bible.”

Carter asks if there are ministers or missionaries present. Three stand, and Carter asks one to deliver an opening prayer.

Before turning to the Old Testament Book of Ezekiel, Carter gives an update on his health. Ten days earlier, he collapsed due to dehydration during a Habitat for Humanity home build in Winnipeg, Manitoba.

“I had excellent treatment in Canada … free of charge,” Carter says, eliciting chuckles, but “my Atlanta doctors” have me wearing a heart monitor, which makes sleeping uncomfortable.

He moves on to recent work at the Carter Center, a meeting of Latin American dignitaries that discussed the dismal situation in Venezuela and improving conditions in Colombia.

As for Ezekiel, he was “the bearer of bad news,” sent by God to tell the Israelites that they are responsible for their tribulations, for their disloyalty.

Personal accountability is the theme of Carter’s 30-minute talk, delivered without notes.

Carter recalls his interview as a young naval officer with the imposing Adm. Hyman Rickover, “the smartest man I’ve ever known.”

When asked “Did you always do your best?” Carter felt obligated to respond, “No, sir,” certain (incorrectly, as it turned out) that this would end his chance to join Rickover’s program to develop nuclear-powered submarines.

After detouring to his election as president in 1976 — when “everything was going bad for our country” — Carter connects the lamentations and fears of Ezekiel’s time to our time, as people search for purpose, for joy in their lives.

From one perspective, he suggests, Jesus’ life was a failure. His message was rejected by the religious authorities of his day and he was betrayed by disciples and crucified by the Romans.

Carter suggests redefining what constitutes a successful life. “What kind of a person do I want to be?” he poses. “We make decisions about what kind of person we want to be and how we want to live the rest of our lives.”

Carter concludes with counsel that the acceptance of Jesus “is the key to a full and fruitful and happy and peaceful life.”

After a 10-minute interlude filled by the church organist, the Carters return and take third-row seats to my left, among members of Maranatha Baptist. You might take them to be any elderly couple attending church.

Except for the earpiece-wearing (and presumably armed) Secret Service agent sitting behind them.

During the singing of Hymn 217, “Oh, How I Love Jesus,” I wonder if either Carter has noticed that the fellow fourth from the right in the second row behind the pulpit isn’t singing.

After the invocation, comes Hymn 132, “There is Power in the Blood.”

There is power, power, wonder-working power

In the blood of the Lamb;

There is power, power, wonder-working power

In the precious blood of the Lamb.

I may not be an observant Jew, but the numerous references to the blood of Jesus make me a bit uncomfortable.

Both Carters smile broadly as Lillian Pickett, who is a couple of months older than Jimmy, belts out the hymn “He’s a Battle Axe.”

Patterson enthusiastically delivers a sermon titled “The Best News,” which, no surprise, is that Jesus’ message is the best news anyone can receive.

It’s past 11 a.m., I’ve not eaten and I am worried about nodding off, and my head smacking that stone wall behind me, in full view of the congregation — and the cameras recording the service.

I am grateful for the benediction.

Knowing what was coming next makes it no less astounding.

The Carters sit on stools, and have their picture taken with every visitor, a line that snakes through the sanctuary and into the overflow room.

I stand on Rosalynn’s right and my wife on Jimmy’s left as a volunteer, using my wife’s phone, takes several shots in rapid succession.

After returning home to Atlanta, the pictures we share fascinate our family and friends, most of whom had no idea that this nonagenarian, house-building, election-monitoring, disease-eradicating ex-president also teaches in church on numerous Sundays before hundreds of visitors, who, like ourselves, leave nothing short of amazed.

Dave Schechter is a freelance writer who worked for 26 years coordinating U.S. news coverage at CNN. The views expressed in this opinion piece do not necessarily reflect those of Religion News Service