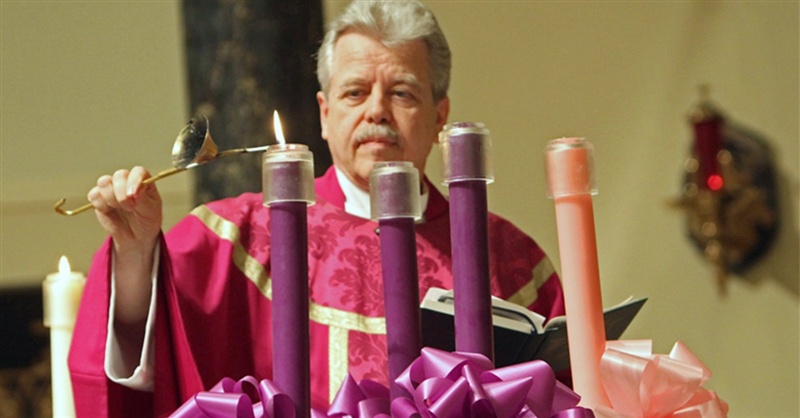 Advent, Not Just Another Christmas Countdown

It’s Christmas, the most wonderful time of the year — right?

Before Christians in many liturgical traditions celebrate Christmas, they observe a season of Advent that traditionally has been referred to as “a little Lent,” the 40-day season of repentance leading up to Easter.

But why push pause on Christmas to observe Advent? Let us ‘Splain.

The first Sunday of Advent also kicks off a new year in the liturgical calendar.

It’s a practice that dates back to the fourth or fifth century, some time after Christians began recognizing Easter and Christmas, according to Rita Ferrone, contributing editor at Commonweal magazine and author of several books on liturgy. And it takes its name from the Latin “Adventus Domini,” Ferrone said, meaning, “the coming of the Lord.”

The date for the start of Advent moves around a bit. It’s always four Sundays before Christmas, which is celebrated on Dec. 25, regardless of the day of the week.

In her book, “The Liturgical Year: The Spiraling Adventure of the Spiritual Life,” Sister Joan Chittister writes, “Advent is about learning to wait.”

“I think Advent is a time that is reflective and invites people to slow down a little bit and contemplate the mystery that’s unfolding here, that asks people to be more focused on prayer. I think all those things are kind of good in the wider culture that is getting wound up with commercial excitement and jingle bells and jingling cash registers. Advent is a little ocean of serenity in people’s lives.”

So it’s basically a countdown to Christmas, right?

Not entirely. Liturgically, the Christmas season doesn’t start until Christmas Eve, continuing until the Sunday after Epiphany, which marks the visit of the wise men to the infant Jesus, according to Chittister. Advent has its own songs and symbols and traditions, distinct from Christmas.

And, Ferrone said, historically the focus of the season likely was “more on this awareness of the ultimate triumph of Jesus in his second coming, and it was kind of secondarily about getting ready for Christmas. Both of those themes are observed today.”

Many Christians also reflect on virtues assigned to each of the candles and weeks of Advent — hope, love, joy and peace — though Ferrone said that’s not universal.

What do Christians do during Advent?

Christians may light candles on an Advent wreath, both at church and at home, and count the days of the season on an Advent calendar. Some may make a devotional book, which generally includes a Scripture reading and reflection for each day of the season, part of their personal Advent practice.

Another tradition that has caught on more recently is a “giving” or “angel” tree at churches, decorated with wishes from organizations and people in need that church members can volunteer to help at Christmas. The Advent Conspiracy, a movement started by five pastors, similarly aims to encourage faith communities to spend less and give more, among other things.

Several saints’ feast days also fall during the season, and their traditions have become part of many Advent and Christmas celebrations around the world, Ferrone said. St. Lucia and St. Nicholas, for instance, often are associated with the season.

What’s with the candles, and why is one of them the wrong color?

An Advent wreath is just that — a wreath with five candles: usually three purple and one pink, or rose, that are lit on the four Sundays of Advent with a white Christ candle at the center that is lit on Christmas Day.

It grew out of a Scandanavian custom of hanging a wagon wheel from the ceiling during the winter months, draping it in evergreen branches to symbolize life and circling it with candles to provide light as the days grew shorter and darker, Ferrone said. And it became a popular devotional practice in Christian homes before it was adopted by churches, she said.

The liturgical color purple symbolizes penance, and pink, joy. The pink candle is lit on the third Sunday of Advent, known as Gaudete (Latin for “rejoice”) Sunday.

And chocolate, right? There’s something about chocolate?

You see a lot of cardboard Advent calendars that are numbered 1 to 24 or 1 to 25, with a door to open each day of December, leading up to Christmas Eve or Christmas Day. That’s easier than timing the doors with each day of Advent, which changes in length each year.

Some have a little chocolate behind each door. Some simply have a picture or Bible verse.

The first printed Advent calendars were produced in the early 1900s in Germany, according to Mental Floss, and popularized in the United States after President Dwight D. Eisenhower’s grandchildren were pictured with one.

A search for “Advent calendars” on Pinterest turns up many of the homemade variety: Felt calendars with pockets filled with ornaments that can be pinned to a tree, wooden boxes with numbered drawers stuffed with prizes, “Jesse Trees” with Scripture readings and ornaments to hang.

And in recent years, novelty Advent calendars have gained popularity. If chocolate isn’t your style, you can spend the season finding surprises behind the doors of the Craft Beer Advent Calendar (“for a very hoppy Christmas”), Lego City and Lego Star Wars Advent calendars, even calendars filled with beauty products.