Controversial Book ‘The Shack’ Makes the Leap from Page to Screen 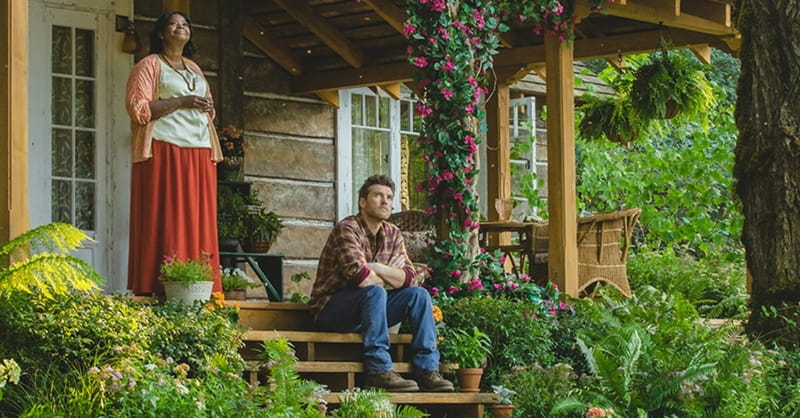 The 15 copies William Paul Young made at Office Depot did everything he had hoped they would do.

Young fulfilled a promise he’d made to his wife to write something down for their six children that captured the way he viewed God, and the 15 copies were given to his family and friends as Christmas gifts.

Then friends started sharing copies of the story. And Wayne Jacobsen, an author he’d briefly met and shared the story with, urged him to publish it.

After it was rejected or ignored by 26 publishing companies, Jacobsen and his friend Brian Cummings set up a small company to publish the story themselves. And Windblown Media sold nearly 1.1 million copies out of Cummings’ garage in just over a year. Now Young’s best-selling book “The Shack” is completing its decadelong journey from the page to the screen in a Hollywood film opening this weekend (March 3), starring Octavia Spencer and Sam Worthington.

“The rest of this, as far as I’m concerned, is God’s great sense of humor,” Young said.

“The Shack” is the story of Mackenzie Allen Phillips, whose youngest daughter is abducted during a family vacation. Later, in the midst what Young calls Mack’s “Great Sadness,” he receives a letter from God inviting him back to spend the weekend at the shack in the Oregon wilderness where evidence of his daughter’s murder was discovered.

“Beyond all the political divisions and the ethnic and cultural divisions and the economic divisions, we all know love and loss, and this kind of loss asks the best questions about God, about who we are as human beings, and because it goes so deep, it picks up all the other losses with it,” Young said.

It’s a work of fiction, but it draws on the author’s experiences growing up in New Guinea as a missionary kid and “modern evangelical fundamentalist” as well as his experiences of physical and sexual abuse and his distant relationship with his father.

He spent 11 years reconstructing his faith, asking where God is in the midst of grief. And all of that is represented in the weekend Mack spends at the shack, he said.

“I wrapped that whole history into that storyline, and it just turned out it accomplished some pretty unexpected things,” Young said. “It gave people a language to have a conversation about God that was not religious but relational, and it validated people’s Great Sadnesses.”

It also raised controversy in some evangelical Christian circles.

R. Albert Mohler Jr., president of the Southern Baptist Theological Seminary, wrote in a 2010 blog post that the book’s dialogues between Mack and God “reveal a theology that is unconventional at best, and undoubtedly heretical in certain respects.” Mohler accused Young of “universal reconciliation,” or the belief that the death and resurrection of Jesus has reconciled all of creation to God.

(Young, for his part, said he’s a “hopeful universalist” but he has tried to be careful not to declare universalism as doctrine.)

In December, after the movie trailer was released, Joe Schimmel, a pastor and host of the documentary “Hollywood’s War on God,” told Christian News Network that the depiction in “The Shack” of God as “Papa,” a motherly black woman, and Sarayu, an Asian woman who is a gardener, “lends itself to a dangerous and false image of God and idolatry.” Schimmel did not comment in the article on the portrayal of Jesus as a Jewish man.

And more recently, evangelical blogger Tim Challies wrote he would not see or review the movie because it dared depict God at all.

But Spencer — recently nominated for an Oscar for best supporting actress for her role as Dorothy Vaughan in “Hidden Figures” — said she accepted the role of Papa “because I simply loved God being introduced in this way.”

“I love the way the Holy Trinity is presented in The Shack,” Spencer said in an email to RNS.

“It represents a very diverse group of people, which is what the world is. It sort of dispenses with the conventional images of God and what we have in our minds as God. But it’s not saying this is what God looks like, but rather this is what the characteristics of God look like.”

Going from book to screen

Playing the role of Papa in the film adaption of “The Shack” drew Spencer closer to God, she said, and it showed her what communication with God looks like. That was something she feels audiences need right now, too.

“There was just something about this project that I feel the world needs. It’s a balm. It just created a calm for me in my life and there’s just so much light around it,” she said.

While Spencer said, “You can’t be from Montgomery, Alabama and not have a background in the church,” her co-star Sam Worthington, who plays Mack, said he didn’t grow up with religion. He described faith as a journey he started about 20 years ago, when a friend gave him a Bible — and “The Shack” is part of that.

“The journey that Mack does in the book and in the movie, that’s what I could kind of associate with, and by doing the movie, it kind of popped me out this other side, and now I’m starting to understand my relationship with God and how strong faith can be,” Worthington said.

In particular, he said, he was sold on the role by a scene at the end of the movie, in which Mack admits to his oldest daughter, who blames herself for her sister’s death, that he knows what she’s going through and is only starting to learn how to deal with those feelings himself.

“That’s one of the most honest lines I’ve ever said because it was exactly how I was feeling,” he said.

For producer Gil Netter, who also was behind inspirational films like “The Life of Pi” and “The Blind Side,” it was the theme of forgiveness that led him to “The Shack” — that, and his wife. Cummings, who had been distributing the books from his garage, was a youth pastor at Netter’s church and had given his wife an early copy.

She, in turn, had given copies to everybody she encountered, he said.

Summit Entertainment bought the rights to make the movie in 2013, and Netter said he probably supervised more than 60 drafts of scripts. It was so important to him, and his vision for it, so clear — almost like a vision from God, he said — that he personally was involved in everything from shopping for Spencer’s wardrobe to placing flowers on the set.

“I have a mission or a goal in life, and I guess I’m lucky enough to do it, but I only make movies that put positive things into the world,” he said.

A decade after publishing the book that started with a handful of photocopies, Young said he was surprised to be invited to give feedback throughout the filmmaking progress and pleased with how it turned out.

“I think readers of the book will recognize the distinction between a book and the movie, but they will not be disappointed in the movie,” he said.

But the popularity of “The Shack” is just the tip of the iceberg, Young said.

There’s “no doubt” evangelicalism is changing, returning to an understanding of God in line with the early church fathers and mothers — an understanding he tried to capture in his book, he said.

“As the structures start to crumble, which they are, all of a sudden permission to ask the questions is emerging,” he said.

“I think that’s a movement of the Holy Spirit. … I think we’re on the cusp or inside the beginnings of a reformation.”

Photo: Octavia Spencer and Sam Worthington in a scene from “The Shack.”