×
Home > Blog > Franklin Graham: 2016 Election is the ‘Most Critical in Our Lifetime’

Franklin Graham: 2016 Election is the ‘Most Critical in Our Lifetime’ 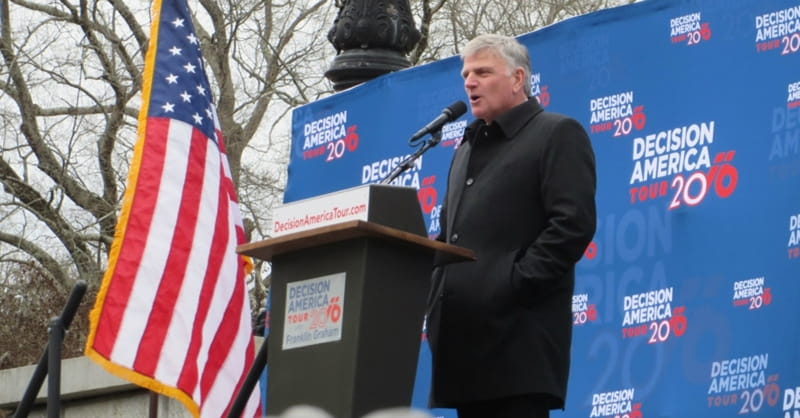 Evangelist Rev. Franklin Graham has been touring the country on his Decision America Tour and urging Christians to pray for the nation.

Recently, Graham reminded Christians via Facebook that this November election “is the most critical in our lifetime.”

Graham added that “so much hangs in the balance” in the 2016 presidential election. Although Graham has not endorsed a candidate and has said in the past that he doesn’t place his hope either in the Democratic or Republican party, he went on to urge Christians to prayerfully consider which candidate’s policies most closely aligns with biblical values.

In his Facebook post Graham also linked to the Billy Graham Evangelistic Association’s website where each party’s platform is laid out in detail so that readers can analyze which candidate is the best choice.

Graham has also acknowledged, according to The Christian Post, that neither candidate may be ideal, but he still encouraged Christians to exercise their voting rights.

“You’re just going to have to ask yourself which of the two [presumptive nominees] do you think we as Christians will at least have a voice with?” he stated.

Graham has been all over the country on his Decision America Tour. He was recently in Boston, Massachusetts. He will end the tour in October stopping in Richmond, Virginia, and lastly, Raleigh, North Carolina.