×
Home > Blog > He Steps Out In Public And Starts Praising Jesus, Strangers Drop Everything And Join In 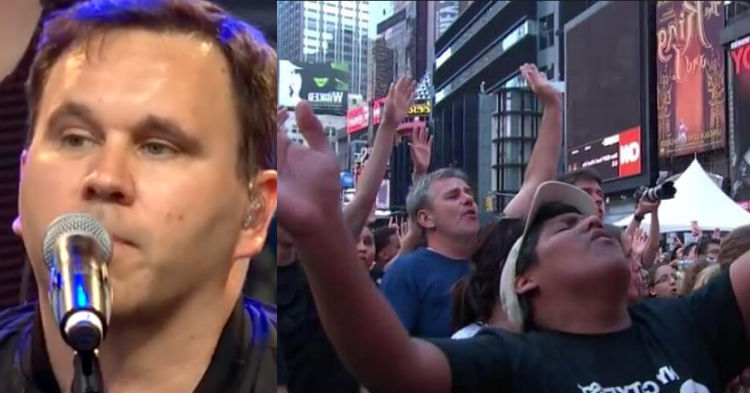 He Steps Out In Public And Starts Praising Jesus, Strangers Drop Everything And Join In

New York City is home to hundreds of atheist and anti-Christian groups. They house meetings, chapters, and even the NYC Atheists organization, which unites people around their lack of faith in the divine. But although New York City is the mecca for the non-religious and liberal, Jesus always has a place in the heart of Manhattan.

Right in the busiest part of New York City, one man stopped everything and began praising God. His act of spontaneous faith was so moving, more people joined in worship. Suddenly, a rare and beautiful moment coalesced around their love for Jesus in the spirit of the American presidential election.

While traffic continued raging along the busy streets, with honking horns and cursing liberals, the thousands of believers gathered around one man as he unashamedly raised his voice in song in the name of Jesus Christ.

Redman led the burgeoning crowd in the prayer session as everyone stretched their arms in complete faith up to the sky. As the capitalist center of the world flashed its fluorescent lights, ticker symbols, and jumbotron advertisement, the revelers connected to their Lord in the middle of the election cycle.

In the video below, watch 10,000 people connecting to God in Times Square being led by Matt Redman.

What do fans like you have to say about the viral video? Here are some of the most popular responses posted under the YouTube video:

“Number One Worship Song of All Time…Praise You Jesus!”

“l pray my church will sing this song. Have been begging them.”

“We must be a strong voice of reason to the Lost by the Power of the Holy Spirit and not just in praise and worship but also in Word and Deed..We are the salt of the Earth and servants and ambassadors of the Most High God…Our God reigns from Heaven Above…”

“Praise God for his overwhelming grace and mercy to an undeserving country that has bowed her head and bent her knees.”

“Sooo amazing !So beautiful seeing so many people Worshiping God !!! # Gave me chills”

“I have this bookmarked so when I need a pick me up, it is there. What a blessing Matt Redman is, using his talent to glorify the Lord.”

What is your reaction? Is this prayer service extremely powerful?

Please SHARE YOUR THOUGHTS in the comments and see what others are saying!