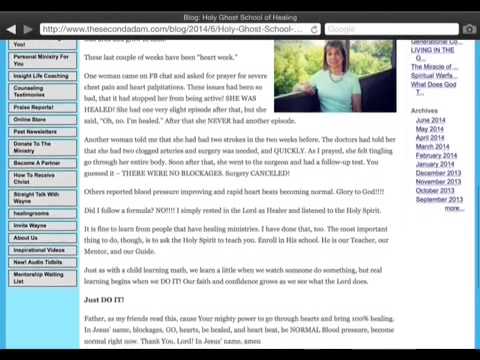 The Holy Spirit is the BEST teacher!

In my life, He has always brought me a series of healing needs in a row so that I can learn from Him in that area and grow in faith.

These last couple of weeks have been “heart week.”

One woman came on FB chat and asked for prayer for severe chest pain and heart palpitations. These issues had been so bad, that it had stopped her from being active! SHE WAS HEALED! She had one very slight episode after that, but she said, “Oh, no. I’m healed.” After that she NEVER had another episode.

Another woman told me that she had had two strokes in the two weeks before. The doctors had told her that she had two clogged arteries and surgery was needed, and QUICKLY. As I prayed, she felt tingling go through her entire body. Soon after that, she went to the surgeon and had a follow-up test. You guessed it — THERE WERE NO BLOCKAGES. Surgery CANCELED!

Did I follow a formula? NO!!!! I simply rested in the Lord as Healer and listened to the Holy Spirit.