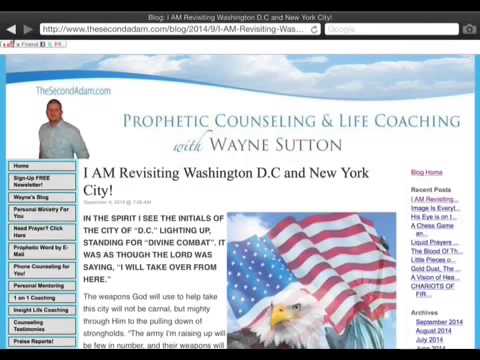 http://www.thesecondadam.builderspot.com/blog/2014/9/I-AM-Revisiting-Washington-D-C-and-New-York-City-
IN THE SPIRIT I SEE THE INITIALS OF THE CITY OF “D.C.” LIGHTING UP, STANDING FOR “DIVINE COMBAT”. IT WAS AS THOUGH THE LORD WAS SAYING, “I WILL TAKE OVER FROM HERE.”
The weapons God will use to help take this city will not be carnal, but mighty through Him to the pulling down of strongholds. “The army I’m raising up will be few in number, and their weapons will appear foolish to many. But My foolishness is wiser than man and My strategic plans will be hidden from the enemy by My Glory as I maneuver My army by My Spirit.”

I saw two of the most powerful weapons being called to this city for major break-throughs….Ram’s Horns and Dancing Feet! As in Gideon’s Army, shofars will be blown again, breaking many hindrances to release the Light of My Glory, as though erecting a lighthouse on the front lawn of the White House.

“You have turned for me my mourning into dancing; You have loosed my sackcloth and girded me with gladness.”

I see seeds of truth being pushed and planted into the ground by dancing feet! I see their roots going down deep and their fruit coming upward cracking the marble floor inside the White House. ..cracking the very foundation of Deception and Greed…exposing the enemy. [The enemy is not man but Satan.]

A MILLION SHOFARS AND DANCING FEET

“Though this army is few in number do not be discouraged. Your assignment is different.”