“I am confident that if this bill came to the floor, it would get a lot of support among Republicans and hopefully a handful of Democrats. if we stay on this and keep talking about it, maybe less than a decade from now, this will be law.” -Senator Lindsey Graham 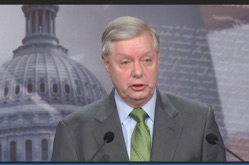 Sen. Lindsey Graham, R-S.C., has introduced the Protecting Pain-Capable Unborn Children from Late-Term Abortions Act. If passed, the bill would prohibit abortion across America after 15 weeks in most cases.  (Screengrab image)

Flanked by pro-life leaders, Graham introduced the bill during a press conference on Capitol Hill Tuesday, saying the legislation aims to limit abortion after an unborn child can feel pain in the womb.

“At 15 weeks, the science tells us that the nerve endings are developed to the point that the unborn child feels pain,” Graham said.

According to a study in the Journal of Medical Ethics, “In high income countries with relatively liberal abortion laws, over 90% of all abortions take place before 13 weeks’ gestation.”

The authors of the study, Stuart W.G. Derbyshire and John C. Bockmann, go on to argue that “abortions before 13 weeks’ gestation do not involve any meaningful likelihood of pain” for the unborn child.

“Overall, the evidence, and a balanced reading of that evidence, points towards an immediate and unreflective pain experience mediated by the developing function of the nervous system from as early as 12 weeks,” Derbyshire and Bockmann write.

America is one of a handful of nations, such as China and North Korea, that allows late-term abortions, Graham noted. If the Protecting Pain-Capable Unborn Children from Late-Term Abortions Act passes, America’s abortion law would be similar that of many European counties like France, Belgium, and Switzerland that limit abortion after 12 or 14 weeks.

“Politicians voting against this bill will stand not only against science, but they will stand against the American public, not to mention standing against basic compassion for women and unborn children,” she added.

Graham’s federal pro-life bill comes just a few months after Democrats introduced the Women’s Health Protection Act, a bill that sought to codify the Supreme Court’s 1973 Roe v. Wade decision and remove all limits on abortion across the county. The bill failed in the Senate in May, a little over a month before the Supreme Court overturned Roe in the Dobbs v. Jackson Women’s Health Organization ruling.

“The Democrats wanted a national standard, and their standard was basically abortion up to the time of birth,” Graham said. “And so now we’re going to talk about what the nation should be like. I’ve introduced this bill, and I’m ready to debate and vote on it.”

There is currently no vote scheduled for the Protecting Pain-Capable Unborn Children from Late-Term Abortions Act, but Graham said he is committed to seeing the bill pass, even if it takes years.

“I am confident that if this bill came to the floor, it would get a lot of support among Republicans and hopefully a handful of Democrats,” Graham said, adding that he predicts “if we stay on this and keep talking about it, maybe less than a decade from now, this will be law.”

Rep. Chris Smith, R-NJ, is leading efforts to further the bill in the House.

“It is time to modernize our laws,” Dannenfelser said in a statement. “We thank Sen. Graham and Rep. Smith for their ongoing leadership in defense of women and the unborn and call on all pro-life Republicans as well as Democrats to support this commonsense legislation.”