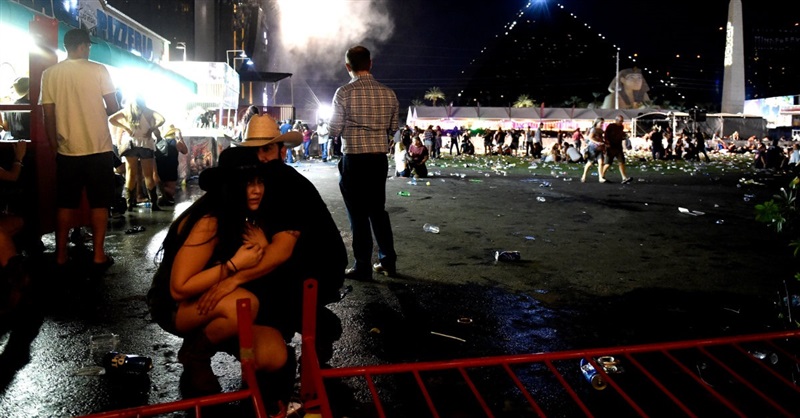 A gunman fired on the crowd at the Route 91 Harvest Music Festival on the Las Vegas Strip last night, killing over 50 and injuring at least 200. Witnesses spotted muzzle flash coming from the 32nd floor of the Mandalay Bay Hotel & Casino. SWAT teams converged on the floor where they shot and killed 64-year-old Stephen Paddock, who is believed to be the only shooter. There were reportedly over 30,000 people attending the festival.

Jason Aldean was on stage during the festival’s last night when shots reigned down in a nine-second burst. As the shots stopped, fans started to realize what was happening and Aldean and his band fled from the stage. Several shorter bursts of gunfire followed as the crowd sought cover. Some fled to the basement of the Tropicana while there were some reports of fans fleeing to the runways of the nearby Las Vegas International airport.

The police issued an alert for Marilou Danley, described as a person of interest. Authorities located the woman, believed to be Paddock’s roommate, several hours later.

Sherriff Joe Lombardo reported that two off-duty Las Vegas police officers were among those killed. The shooter also wounded two other officers who were responding to the scene, leaving one of them in critical condition. Paramedics took an off-duty police officer from Bakersfield, California who was attending the festival to the hospital with what they said were non-life-threatening injuries.

President Trump responded to the tragedy on Twitter this morning, saying, “My warmest condolences and sympathies to the victims and families of the terrible Las Vegas shooting. God bless you!”

Aldean posted an update on Instagram, letting everyone know that he and his crew were safe. He expressed confusion about what to say but offered prayers for those injured and the families of those who died.

Photo: People take cover at the Route 91 Harvest country music festival after apparent gun fire was heard on October 1, 2017 in Las Vegas, Nevada. There are reports of an active shooter around the Mandalay Bay Resort and Casino.