×
Home > Uncategorized > ‘That’s How You Get away with It’: Liberal Principal Admits Discriminating against Religious Teachers 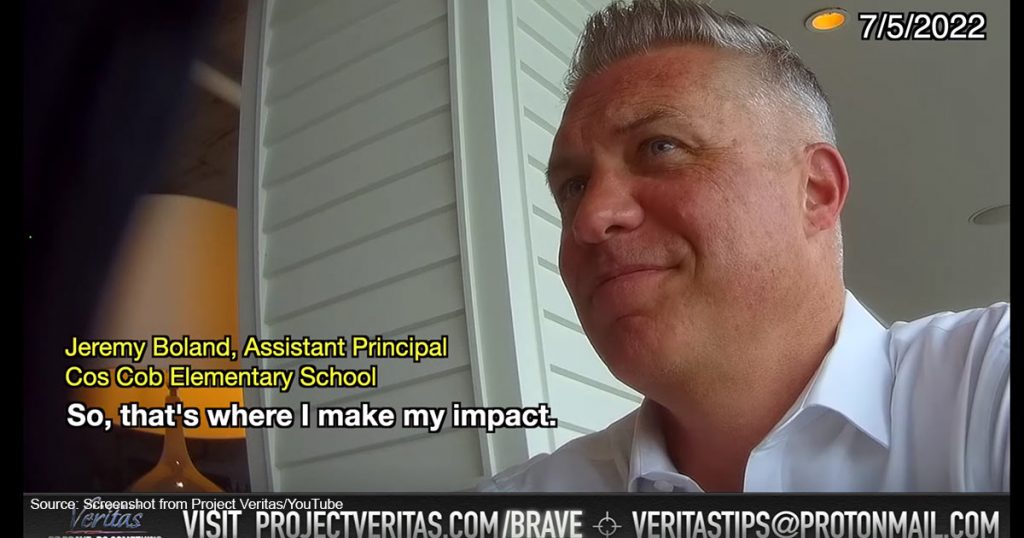 An undercover video has captured a public school administrator admitting that he quietly refuses to hire “brainwashed” religious teachers and older people, so he can impose his own liberal views on the district’s schoolchildren. His comments touched off a torrent of criticism from Catholic officials, education experts, and Democratic elected officials.

Jeremy Boland — the assistant principal of Cos Cob Elementary School, a public school in Greenwich, Connecticut — unknowingly made numerous controversial statements to investigative journalists with Project Veritas. The 12-minute video, which was shot in July and posted online late Tuesday night, appears to show Boland confessing that he won’t hire Catholic applicants, a violation of state and federal civil rights laws.

“If Mr. Boland had said he doesn’t hire LGBTQ+ teachers, he would already be begging for another job,” Meg Kilgannon, senior fellow for Education Studies at the Family Research Council, told The Washington Stand. “Who knows how many other school administrators share his hostility toward conservatives, parents, and Catholics?”

Boland describes the hiring practices of his affluent school in response to a series of questions posed by a female journalist, whose face is obscured. He says he wants his own, progressive views instilled in public schoolchildren, whether their parents want it or not. That requires blackballing religious applicants, whom he implies are “brainwashed.”

Boland then admits that, while he cannot legally ask about the person’s political views, he takes age and religion into account — both protected categories under employment law.

“I’m not a huge expert on religion, but Protestants in this area are probably the most liberal. But if they’re Catholic — conservative,” Boland tells the journalist. “You don’t hire them.”

“So, would you never hire a Catholic then?” asks the undercover journalist.

“I don’t want to,” Boland responded candidly. “If someone is raised hardcore Catholic, it’s like, they’re brainwashed — you can never change their mindset. So, when you ask them to consider something new … or [say], ‘You have to think about this differently,’ they’re stuck — just rigid.”

While his comments centered on Roman Catholics — as opposed to mainline Protestants in the Northeast — they would apply to evangelical Christians, observant Jews, and members of the Eastern Orthodox Church.

Boland also says in the video that he has screened out older teachers, even if they have more experience, because younger people trend more to the left. For one position, “I don’t think I interviewed anybody over the [age] of 30,” because “the older you get, the more set in your ways — the more conservative you get.”

Legal experts note his comments violate the 1964 Civil Rights Act, which bars employers from discriminating against job-seekers based on “race, color, religion, sex, or national origin.” Connecticut state law also makes it illegal “to refuse to hire or employ or to bar … any individual or to discriminate against such individual” because of his or her “religious creed.”

‘I Can’t Get Past the Parents’

The elaborate, unwritten rules became necessary when parents began pushing back against the left-wing views he placed in their children’s curriculum. “I can’t get past the parents anymore,” laments Boland.

“The parents feel as though it’s their responsibility to shape the schools, which then shape the kids,” he says, echoing Virginia Democratic gubernatorial candidate Terry MacAuliffe, who said, “I don’t think parents should be telling schools what they should teach” before going down to defeat by Glenn Youngkin. “So, because I can’t get past the parents, do I really have as much of an influence on the kids as I want? I try in my own way,” he admits. But since parents insist on influencing their child’s curriculum, “right now my job is to hire the right teachers.”

He also crafts interview questions to determine the applicants’ political views. He asks if the district rolls out a curriculum “and the parent disagrees with you, how do you handle that?” If the applicant would side with the parent, Boland tells the journalist, “They don’t get the job.”

Encouraging teachers to take an adversarial position toward their pupils’ parents could also place Boland, and his school, in legal jeopardy. Middle school officials in Fort Riley, Kansas, agreed to pay $95,000 after suspending math teacher Pamela Ricard for refusing to hide the social transition of a young girl who identifies as a boy from her parents during a parent-teacher conference, and for calling the girl by her legal name. “No school district should ever force teachers to willfully deceive parents or engage in any speech that violates their deeply held religious beliefs,” said Tyson Langhofer of the Alliance Defending Freedom, which represented Ricard.

‘That’s How You Get Away With It’

Boland praised young social justice warriors who indoctrinate students by speaking of left-wing values as though they are the unquestioned norm. “The open-minded, more progressive teachers are actually more savvy about delivering a Democratic message without really ever having to mention politics. So, it’s subtle. They will never say, ‘Oh, this is a liberal or a Democratic way of doing this.’ They’ll just make that the norm,” Boland says. “That’s how you get away with it.”

The video seems to spell out every allegation and concern raised by parents at school board meetings for the last two years. “Comments like these confirm the instincts of many parents and concerned citizens who realize that America’s children are being indoctrinated in a Marxist worldview by people who claim to ‘serve the children,’” Kilgannon said. “We know those educators are really serving themselves and the Democratic machine that runs our education system. That’s why so many folks are getting involved and even running for school board. As you can see from this incident, there is a great deal of work to do.”

Catholic officials are also livid over the video.

“He must be fired immediately,” insisted Bill Donohue, president of The Catholic League for Civil and Religious Rights. “There is no place for an admitted bigot in education, whether the school is private or public. He has stated — the evidence is indisputable — that he would never hire a Catholic. Had he said he would never hire an African American, they wouldn’t still be thinking about what to do with him.”

The Connecticut Catholic Conference denounced the video as “unacceptable.” Boland’s “comments regarding Catholics as well as indoctrination techniques by the Cos Cob Elementary School assistant principal are vile and they do a profound disservice to the many Catholic teachers in public schools both in Greenwich and across the state,” declared the conference’s executive director, Christopher Healy.

“This is an important moment for all elected officials to denounce these practices and to guarantee that any parents or student who do have concerns about the quality of education be respected and heard,” said Healy.

Several public officials in the heavily Democratic state rose to the occasion, at least rhetorically, so far. Governor Ned Lamont (D) said, “Discrimination of any kind has no place in Connecticut, especially in our public schools. This is not aligned with our Connecticut values.” His fellow Democrat, State Senate Majority Leader Bob Duff, said, “If proven true, these are not our values and should not be tolerated” and called for “a full investigation to determine if this illegal discrimination has been allowed to happen by leaders in Greenwich beyond this man, and if so, all parties need to be held accountable.”

“At the minimum the assistant principal should face immediate legal consequences,” said Duff.

“To think that Roman Catholic applicants may have applied for teaching positions and not received proper consideration due to their religion seems like something from a bygone era, not 2022,” said Greenwich First Selectman Fred Camillo on Facebook. “Brainwashing and indoctrination have no place in halls of learning. … The goal should always be education, not indoctrination.” He added the behavior depicted in the video, “and I see no reason to suspect it is not accurate, is shameful and needs a full investigation into not only this administrator, but the damage caused to applicants, past and present. Our kids deserve better.”

The Greenwich Public School System announced that it placed Boland on administrative leave, which is reportedly paid leave. The state department of education launched a separate investigation.

The superintendent of Greenwich schools, Dr. Toni Jones, said the district was investigating — and because it is investigating, it will stonewall questions related to the story. “We intend to do a full investigation and until that time, we will not make any public statements. We ask that you respect the investigation process,” she told parents of the district in an email on Wednesday. Jones added the district does not “support any opinions that promote discriminatory hiring practices based on race, religion, gender, or age in any way.”

“If justice is not done by Dr. Jones, and other school officials, the Catholic League will pursue every legal challenge available,” promised Donohue.

“Our nation was founded on the inalienable right of freedom of religion. Any attempt to infringe on that right, no matter what faith, must be a priority of those we have entrusted to enforce those laws,” Healy concluded.