×
Home > Video > These Prayer Requests Have No Postage On Them — Return To Sender! 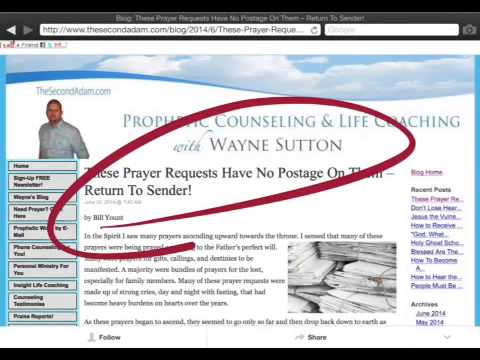 These Prayer Requests Have No Postage On Them — Return To Sender!

In the Spirit I saw many prayers ascending upward towards the throne. I sensed that many of these prayers were being prayed according to the Father’s perfect will. Many were prayers for gifts, callings, and destinies to be manifested. A majority were bundles of prayers for the lost, especially for family members. Many of these prayer requests were made up of strong cries, day and night with fasting, that had become heavy burdens on hearts over the years.

As these prayers began to ascend, they seemed to go only so far and then drop back down to earth as though they were bouncing off the ceiling from where they were being prayed. I saw in heaven like a huge “heavenly post office” where prayer requests are received and where answers to prayers are sent out. At the entrance of this “heavenly post office” on the front door was written in gigantic letters the scripture Philippians 4:6 — “Be careful for nothing; but in everything by prayer and supplication with ‘thanksgiving’ let your request be made known unto God!”

The Prayers Weren’t Making It — They Needed Thanksgiving!