×
Home > Uncategorized > How Does a Church Make the Poor Visible? This One Immortalized Them in a Fresco 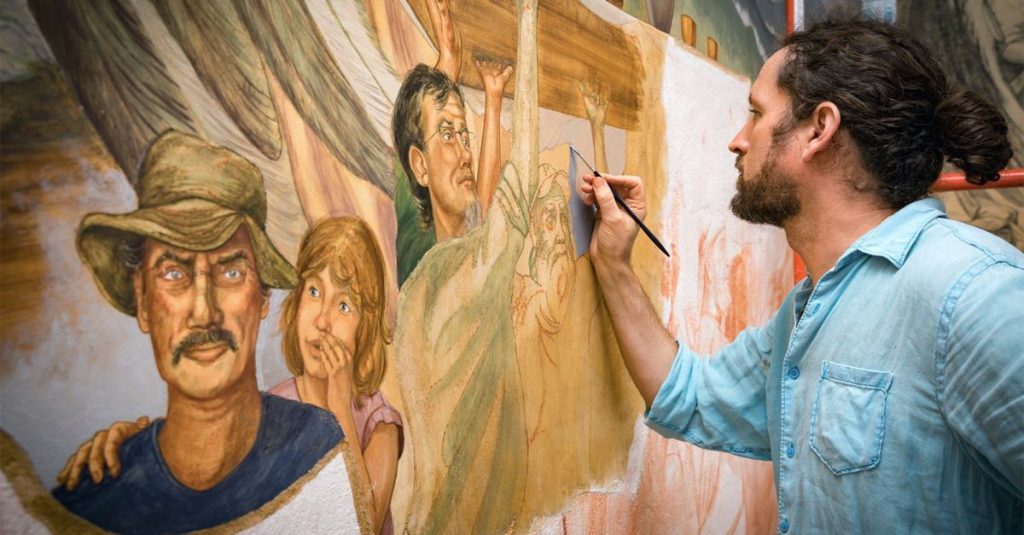 How Does a Church Make the Poor Visible? This One Immortalized Them in a Fresco

ASHEVILLE, N.C. (RNS) — Poor people have often told pastor Brian Combs that the hardest thing about standing at highway intersections holding up a cardboard sign and begging for money is not watching the windows roll up or hearing the click of automatic doors locking.

So when Combs, pastor of Asheville’s Haywood Street, and his friend artist Christopher Holt began talking about collaborating on a project, they envisioned a fresco on an entire wall of the sanctuary featuring images of the poor and downtrodden.

When completed later this month, the 27-foot-by-10-foot composition will illuminate in bright colors the faces and gestures of the people who visit Haywood Street Church’s principal ministry — The Welcome Table, a dining room with a reputation as one of the best places to eat in this mountain town known for its creative spirit.

To Combs and to the hundreds of poor who stop in for a meal each week, the fresco is intended to make the invisible visible.

“The primary intent of church, in my opinion, is to communicate something about sacred worth,” said Combs. “In God’s sight, you are anything but a throwaway. You’re priceless. You’re royalty. That’s one task of urban ministry we take seriously.”

The fresco’s composition is loosely based on the Beatitudes, the nine blessings recounted by Jesus in the Sermon on the Mount, beginning with “Blessed are the poor in spirit, for theirs is the kingdom of heaven.”

But unlike traditional frescoes that have often offered visual representations of God, Jesus, Mary or the saints — think of Michelangelo’s “Creation of Adam” on the Sistine Chapel ceiling, Fra Angelico’s “The Annunciation” in Florence or Giotto’s “Adoration of the Magi” in Padua — this one puts the poor front and center in a style known as Classical Realism.

There’s Robert Stafford, a gardener at Haywood Street. A 58-year-old recovering drug addict, Stafford first came for meals and stayed on to work the grounds. In the mural, he’s depicted clutching three sunflowers.

And then there’s David Holland. A decade ago, Holland quit his job at Buffalo Wild Wings, threw his belongings into a dumpster and walked into the woods. In 2011, he came to Haywood Street for a meal. He’s now the “banquet steward,” or executive chef. He’s portrayed in the fresco wearing his trademark apron.

Both men were meticulously drawn by Holt, the 41-year-old principal artist.

A student of Ben Long, an Asheville-based master fresco artist who has created a dozen fresco paintings in churches and municipal centers across the state, Holt said the Haywood Street project was unique because of its subjects.

“The most enriching part of it was getting to know different folks from the community and maintaining a friendship with them,” he said.

An average of 1,000 people tromp to Haywood Street each week for its Sunday breakfast and Wednesday lunch — many with backpacks larger than their weathered bodies.

They take their seats at tables set with fresh cut flowers, a white tablecloth and white dinner napkins. Wait staff in white aprons take their orders. Entrees are plated on ceramic dinnerware made by East Fork, the hip pottery outfit just a few miles away.

Over the past 10 years, the Welcome Table has partnered with some of the top chefs from North Carolina, many of whom now vie for dates to plan menus and serve meals.

It’s all part of Combs’ core conviction: that the poor should not only be treated generously, but extravagantly.

“Spend a little time in a typical soup kitchen and what you’ll find most times is that the food is left over,” said Combs. “It’s out of date. It’s something someone else didn’t want. It’s discarded. It’s served in a styrofoam board on a tattered tray. And you’re told, this is all we have.”

Combs, on the other hand, thinks that when it comes to the poor, the church ought to be indulgent to the point of being wasteful.

It’s an idea he’s extended to the fresco project, which is costing the church nearly $300,000.

Work on the fresco began last October when four artists applied lime and sand — the elements of plaster —  to a sanctuary wall and allowed it to cure for eight months.

As it did, Holt and his crew sat down with a dozen Welcome Table visitors and volunteers to draw their portraits and assemble a large “cartoon,” or sketch of the entire artwork.

The church has also partnered with a company to create a kiosk where visitors will be able to see a computer image of the completed fresco. By tapping on different images on the screen, they will be able to listen to recordings of the people in the fresco speaking about their lives.

The emphasis on living out Jesus’ upside-down kingdom, where the first are the last and the last are the first, has been part of Combs’ thinking since starting the church 10 years ago.

Combs had been searching for an urban ministry after graduating from Emory’s Candler School of Theology, where he said reading civil rights’ leader Howard Thurman’s “Jesus and the Disinherited”’ changed his life.

He found the perfect space in an 1891 brick Italianate church building that had been vacant after its previous congregation merged with the larger Central United Methodist Church.

Haywood is a mission church, a special designation in United Methodist nomenclature that means a congregation focused on outreach to marginalized groups and supported through donations from other churches and from individual donors.

Haywood Street has no formal membership. Sometimes only 50 people arrive for Sunday services. But Combs believes the heart of the worship experience is not the sermon but the shared meal.

“We believe you’re only doing church if you’re eating together,” Combs said. “We would say unapologetically, that’s church.”

In addition to the Welcome Table, the church has added a number of supporting ministries. There’s a clothing closet and a clean needle exchange that distributes Naloxone, the overdose reversal drug. There’s also an eight-bed respite, where homeless people recuperating from a hospital stay can regain their strength before returning to the streets or the woods.

The fresco is the latest of these efforts and the church hopes it will help the larger Asheville community focus more intently on confronting the poor.

The church has begun hosting live lunches on Tuesdays and Thursdays where people can drop in on their lunch break to watch work on the fresco and ask questions of the artists (Holt and three of his assistants).

The fresco steering committee has worked hard to generate buzz about the impending completion of the artwork.

“I’m already getting calls from hotel managers,” said Pam Siekman, the committee’s chairperson. “They’re like, ‘Pam, when will it be done? We want to put together a fresco visitor package.’”

For the people who frequent Haywood Street there’s no need to burnish the message of the fresco. They get it.

“I’m here to restore dignity to the undignified,” said David Holland, the banquet steward who was once homeless. “That’s what I do and that’s how I look at it. That’s my motivation.”

8 thoughts on “How Does a Church Make the Poor Visible? This One Immortalized Them in a Fresco”