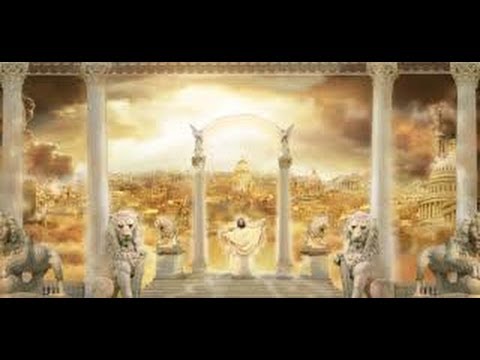 There are no Scriptures to back what Dr Percy Collett is telling, but I do believe this man is telling the truth! It happened on this fashion: We were all praying in unison just as they were doing in the Upper Room. I had thought many times about Elijah going and Enoch and the others. And especially, Jesus, my Saviour, how He went to Heaven and they saw Him go and He will return in like manner as He left to come and take His People Home. During some of the dreams that I had about Heaven, It was always going up, up, up beyond the sun and the Moon. And It happened that way.

My Angel appeared to me among the trees. It had rained that day and the flowers were fresh and looming, the grass looked so green and everything looked so pretty; the sky was blue and fair, not a cloud in the sky. As my soul had left my body and my soul looked down at my own body, My Guardian Angel, He, Who had been with me for so many years, said to me:
“We Are Going To Take The Journey. I Have Not Been In Heaven Since You Were Born And At The Time I Appeared To You In Edgehill In The Bedroom, I Have Been Watching You All the Time. Several Times, You Would Have Been Killed By The DEMON POWERS Of Satan Had I Not Been Guarding You.” My soul and the Angel stood there in expectation as everyone else was still lying on their backs under the Power of THE LIVING GOD. We were the only ones standing. My soul was so light and gravity had no effect on my soul. I was feeling just like a Spirit, but yet I could think and talk, It was no subconscious mind, It was my soul that soul that is spoken so much about in the Bible. And the Angel was my real Angel which is spoken so much of in the Bible.
Looking into the beautiful blue sky above, here we saw coming The Angel Of The Lord and He settled at my right hand with a flaming sword of fire in his hand.
And a commanding, powerful voice came from his lips: ”I Have Come From GOD The Father To Take You To Heaven. We Are Leaving Right Now. ”
We began to lift off from the ground just about like a helicopter would lift off and yet, there were no propellers, no Earthly Power to take us up. We were drawn upward by the Power of The Living GOD. Very quickly, we were traveling a million miles a minute, for the journey was over Three Trillion Miles, and yet, It was only a six hour journey. The speed in which we were traveling was millions times faster
than the one in which the Astronauts travel to the moon. For we would make this journey of over Three Trillion Miles in Six Hours, faster than any light or darkness, or sunup, or sundown.”
It seemed only a moment or two when we were passing by the sun, a spectacular sight to hold; a fire so hot that it could burn you up if you were in the natural. But, the heat of the sun did not hurt us or bother us. The eyes of my soul could look right into the sun, one of GOD’s spectacular Creations; the Fire that GOD put there to keep the Earth warm, to make the crops grow. If ever Man could harness the sun, He would have more power than He needed.
But, we were going beyond the sun to GOD The Father, The Greatest Fire And Power of all because GOD is a consuming Fire. We were going to His Throne to see Fire hotter than any other in all the universe. As we passed the sun and this present Solar System, this creation where the Earth whirls around in, Jupiter and Mars, and all the others; this became real to me. I had heard about it; I had thought about it, but, of course I had never experienced it before.
After passing the sun at millions of miles a minute, we came to another sun and another solar system and planets all around it.
And then, another one that was just being created by GOD, where the New Earth will be going around and around. I have been telling of this New Earth and this New Ball of Fire ever since I came back from Heaven.
And at last the scientists have found it; they are seeing it on their tremendous telescopes, substantiating the facts and the truths of my journey. Then, after passing GOD’s New Creation and coming out of billions of square miles of beautiful stars, singing and glorifying God, the Ones that GOD had put in place to worship Him, we could now see Heaven in the midst of all these stars, the tremendous planet, HEAVEN, so spectacular and so BIG, eighty times larger than the Earth!
There was Heaven, in the midst of all the stars, surrounded by fire, and lighting, and clouds. The Gates of Heaven were open and now all three of us were inside .
WE HAD TRAVELED OVER THREE TRILLION MILES IN SIX HOURS!