Why Did Aaron Hernandez Write ‘John 3:16’ on His Forehead before Killing Himself? 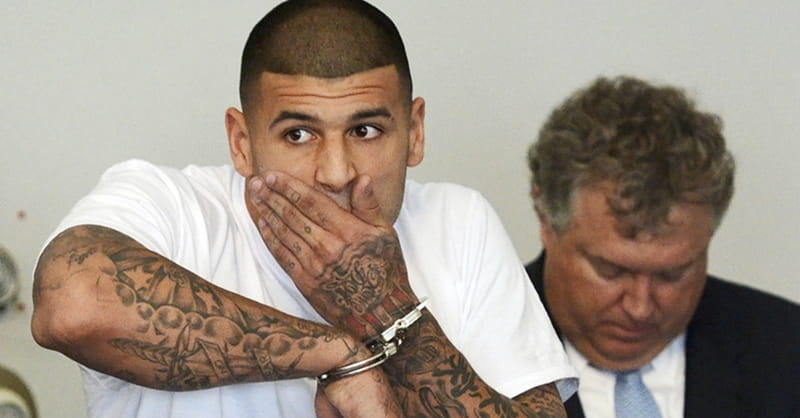 It wasn’t a suicide note that former NFL star Aaron Hernandez left in his prison cell when he reportedly hanged himself.

Instead, the Massachusetts corrections officers who discovered his body Wednesday morning (April 19) saw “John 3:16” written across Hernandez’s forehead in red ink. A Bible in the cell lay open to the same verse.

Hernandez seemed to want to send a message.

“For God so loved the world that he gave his one and only Son, that whoever believes in him shall not perish but have eternal life,” the New Testament verse reads.

Hernandez was a convicted murderer, serving a life sentence without the possibility of parole, and one who had led what many would deem an irreligious life — brawling and using illegal drugs. In 2013 a jury convicted him of killing semipro football player Odin Lloyd.

But at times in his life, Hernandez also seemed to try to ground himself in religion — perhaps to ease a guilty conscience or to help keep his career on track, some have suggested: He signed a $40 million contract with the New England Patriots in 2012.

Or perhaps Hernandez was a genuine believer. Perhaps all three.

John 3:16 is one of the most widely quoted verses in the New Testament and is frequently invoked before death. The verse is carved into many a Christian’s gravestone, perhaps because it seems to sum up the Christian faith as well as any sentence in the Bible: Believe in Jesus, and you will enjoy everlasting life.

Martin Luther, the 16th-century German monk and theologian who sparked the Protestant Reformation, reportedly called John 3:16 “the gospel in miniature.”

More recently, the verse has been linked with football.

The makeshift John 3:16 tattoo Hernandez apparently drew on his forehead was far from the only reflection of faith on his body. The Connecticut-raised football star, son of an Italian mother and Puerto Rican father, was covered in ink.

A tattoo on his right arm, of a gun next to the phrase “God Forgives,” may be a testament to his belief in God’s mercy. But prosecutors called it a confession in a 2012 double murder case, in which Hernandez was charged with fatally shooting two men in Boston in 2012.

Hernandez was acquitted of those slayings five days before he was found dead.

In a 2009 USA Today story about his tattoos, Hernandez pointed out representations of God’s hands at his shoulder, and angels near his wrists.

“There’s Jesus’ hands on the cross, and that’s about the pain we all go through,” he explained to writer Kelly Whiteside, pointing to his left arm.

Other tattoos on his torso honor his father, Dennis Hernandez, with his favorite sayings and symbols of joy. The football star called his relationship with his father, who died of a medical complication when Aaron was 16, particularly close.

Friends and family said Hernandez had craved a father figure ever since.

He found one in Urban Meyer, former head football coach at the University of Florida, where Hernandez played starting in 2007. Many news accounts report that Hernandez and Meyer regularly studied the Bible together and that Meyer assigned Tebow — then a Florida Gator who would soon become the most outwardly devout Christian to play in the NFL — to keep an eye on Hernandez.

Hernandez’s death may result in the vacating of his murder conviction, which he had been appealing, according to The Boston Globe.

The former player’s lawyer has questioned whether Hernandez actually killed himself.