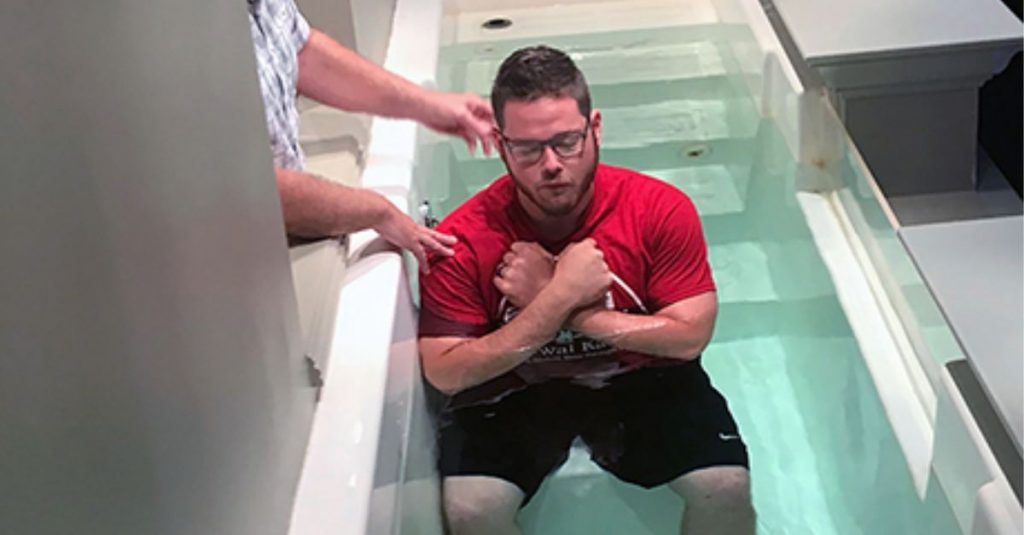 A homeless drug addict who broke into an Arkansas church and vandalized $100,000 worth of property was baptized at the same congregation six months later – all because the staff and church members displayed grace and got him much-needed help.

Brenton Winn, 23, was arrested in February after breaking into Central Baptist Church of Conway, Ark., and destroying $100,000 in church property. He threw the soundboard over the worship center balcony. He set part of the family life center on fire. He destroyed laptops. At the time, the church’s senior pastor, Don Chandler, told KTHV it was “about as messy of vandalism as you could possibly imagine.”

Winn, who was homeless and high on drugs, faced multiple charges and seemed destined for years behind bars.

But Chandler, while meeting with the prosecutor, chose to extend grace, according to Baptist Press. Chandler wanted Winn to get help.

“You can’t preach something for 50 years without practicing it, especially in front of your whole church,” Chandler told Baptist Press. “Had we not shown some grace to him, everything we’ve talked about and encouraged, would have gone by the wayside. It was simply the right thing to do. This was not a hardened criminal. This was a young man who had made some mistakes. He was on drugs and alcohol when he did what he did. But he was redeemable.”

The judge gave Winn an option: Face up to 20 years in prison or voluntarily enter a 12-month rehab and recovery program run by a Christian-based ministry, Renewal Ranch. Winner chose the latter, Baptist Press reported.

Winn had been doing methamphetamines and other drugs, off and on, since age 14.

“Before I knew it, I had a full-blown drug addiction,” Winn told Baptist Press. “From the time I was 16 until a few months ago, my life was nothing but chaos, suicide attempts and brokenness.”

Winn accepted Christ at one of the Renewal Ranch Bible studies. In August – six months after his crime – he was baptized at Central Baptist Church, the same congregation he tried to destroy.

“As I’m starting to understand how God works, I’ve realized I didn’t pick the church that night. God picked me,” Winn told Baptist Press. “If it had been any other church, I think I’d be sitting in prison right now.”

He added, “I used to think it was a coincidence [that I chose to break into the church that night], but now I call it confirmation that God is real, and He answers prayers. What was weighing on my heart was that I needed a relationship with Jesus Christ.”