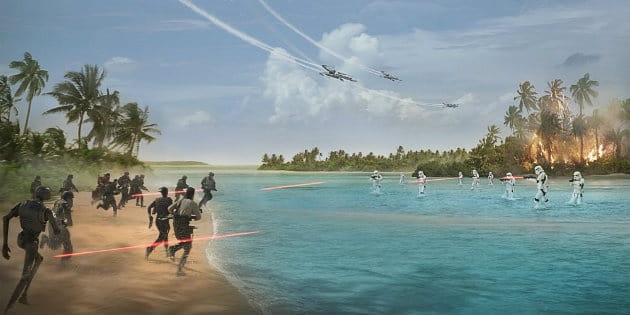 The Star Wars franchise has always carried an element of faith within its narrative, but the upcoming Rouge One looks to expand on this concept like never before. In a recent interview with Entertainment Weekly, director Gareth Edwards discussed how the newest film with explore heavy religious themes and their place in human history. To do so, he gave readers an inside peek at this highly-anticipated new movie.

(Warning: The following may contain spoilers)

The story of Rouge One will actually take place during the events of the original 1977 film, and center on the rebel’s mission to steal the Death Star plans. Doing so will eventually lead them to a world called Jedha, which holds significant meaning to the Star Wars universe. Edwards explains,

“‘The Force is basically in Star Wars like a religion, and they’re losing their faith in the period that we start the movie,’ says Gareth Edwards, director of the story that’s set just prior to the events of 1977’s original Star Wars. We were trying to find a physical location we could go to that would speak to the themes of losing your faith and the choice between letting the Empire win, or evil win, and good prevailing,’ he says. ‘It got embodied in this place we called Jedha.’”

“‘It’s a place where people who believe in the Force would go on a pilgrimage,’ Edwards says. ‘It was essentially taken over by the Empire. It’s an occupied territory… for reasons we probably can’t reveal.’”

Images of an occupied holy land, embattled believers, and a struggle for faith. These ideas practically resonate with a biblical understanding. Currently, the Rouge One is scheduled to release this December, but a new trailer for the film will debut this week during the Olympics.

Take a deep breath, it’s going to be an interesting journey.