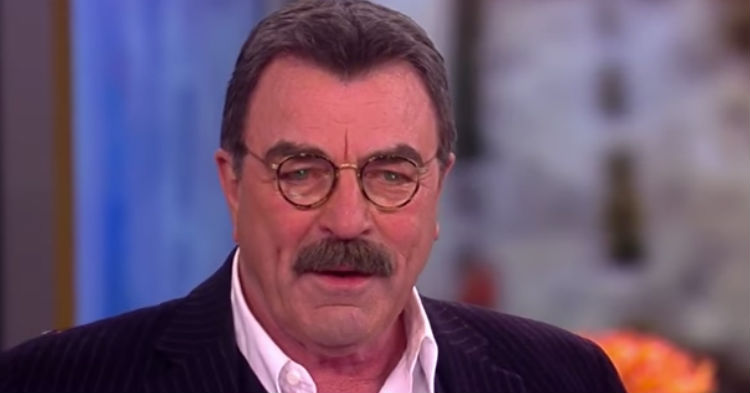 For the last four-and-a-half decades, Tom Selleck has inspired, romanced, and captured the hearts of countless Americans. Whether in his influential roles in Magnum P.I. or Blue Bloods or The Closer, Selleck has drawn on an uncanny acting ability that he credits to one thing and one thing only – his faith in Jesus Christ.

But he didn’t always have the undying Christian faith he does today. And his journey to Jesus was a rocky one that he recently opened up about.

In the wake of American heroes like John Wayne, Tom Selleck showed the next generation what a real gentleman looks like and went on to become one of Hollywood’s hunkiest heartthrobs.

While you’ve probably always liked Tom Selleck, you’ll find an even deeper respect for the actor after learning about his humble beginnings and his faith in Jesus Christ as his Lord and Savior. Learn more about this great man in the article below…

Born in Detroit, Michigan on January 29, 1945, Thomas “Tom” William Selleck was raised by hardworking blue-collar parents. His father was a carpenter and his mother was a housewife. Later his father found success as an executive and real estate investor.

Tom, the second born of four children, was always competing with his siblings, especially his older brother Robert.

After Tom’s father realized carpentry was a dead end for him, he moved his entire family to Sherman Oaks, California where he used his savings to invest in real estate. Tom was middle school age when they abandoned Detroit.

Tom was a troublemaker and often received beatings from his father. But then he grew up and became a handsome, responsible teenager. At Grant High School he proved that he had a natural athletic ability.

Just like John Wayne, Selleck also wanted to enroll in the University of Southern California. But he couldn’t afford it. Instead, he enrolled in Valley Junior College, saved money, earned a basketball scholarship and transferred to USC in his junior year.

While in college majoring in business administration, Selleck entered Hollywood upon encouragement from a drama coach. He appeared on The Dating Game in 1965 and 1967 and then landed dozens of TV commercials including products like Pepsi-Cola.

After doing a soap commercial, the ad’s director, Robert Sallin, loved Tom and said, “ [Tom] was so terrific, I gave him the wardrobe. He told me many years later that it was his only suit and he wore it for every casting interview.”

When Selleck graduated from college, Twentieth Century Fox approached the educated man and offered him an acting contract.

Selleck shared, “I think, when I went to Fox, I was on my own with no frame of reference, no connection. I’d never done a play in my life. I started at about thirty-five bucks a week, and every six months you either got fired or renewed. If you got renewed, you got a raise on their term contracts.”

But then God offered him another path. Selleck took a break from acting and joined the military to fight in the Vietnam War. He joined the California National Guard in the 160th infantry regiment and served from 1967 to 1973.

Selleck shared, “I am a veteran, I’m proud of it, I was a sergeant in the U.S. Army infantry, National Guard, Vietnam era. We’re all brothers and sisters in that sense.”

For 11 years, Selleck pursued acting until he had his big break in 1980 when he was 35-years old. His role as Hawaii-based private investigator “Thomas Magnum” would change his life forever.

The show ran for eight season and made 162 episodes. Then Selleck won the Emmy Award for “Outstanding Lead Actor in a Drama Series” in 1984.

But God asked more of Selleck than just a career in Hollywood. And he obeyed…

“I just knew that if I wanted a family — which I was thinking seriously about at that point — that it was time at that point to move on. As good as this business has been to me, that’s not what life is about. Life is about more important things. You know, we’ve all struggled as we get successful in this business to balance that, I certainly have.”

Now, decades into a successful career, Selleck attributes all his fortune to his Lord and Savior, Jesus Christ.

Selleck shared, “I try very hard to conduct myself in an ethical way, because that’s important to my stability now. We’re a culture that’s so centered on the individual,” Selleck complains. “The culture says that basically nothing is more important than the way you feel. We’re living in an age that celebrates unchecked impulses.”

“A man’s heart plans his way, but the Lord directs his steps. Humble yourselves, therefore, under God’s mighty hand, that He may lift you up in due time.”

24 thoughts on “Tom Selleck & Jesus! His Journey of Faith…”